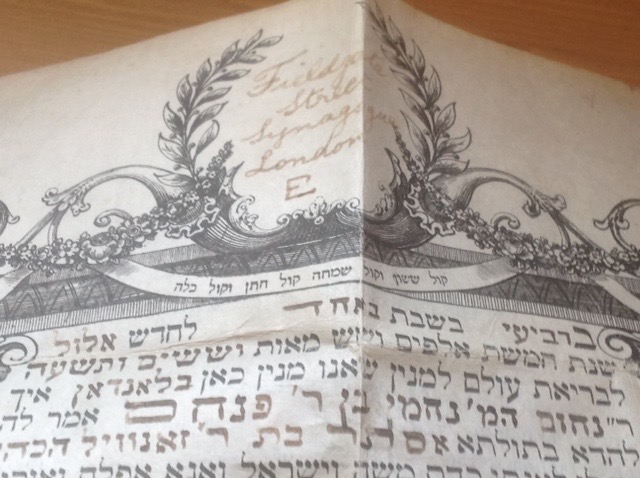 Brian Michaels creates a personal vision of what it means to be Jewish in our world today. The trajectory of the piece doesn’t just stay within the parameters of the Jewish world, but includes all possibilities of faith and cultural identity. It is an artistic confrontation and not an essay on religion.
There will be two silent performers on stage as well as the musician. The performers will take the audience on a journey which combines a form of personal storytelling with the spectrum of Jewish history in Europe and beyond. The audience will be given the opportunity of understanding what a specific Jewish biography in the diaspora can be. This is a journey which Jews and non Jews will undertake together.
Brian Michaels has written a narrative that will be projected in different ways- monitors, screens, walls in each of the different spaces.The text will not be spoken live. This text and the different stations that Avraham and his companion encounter on their journey are the inspiration for the musical compositions and soundscapes. The individual spaces are each an installation in themselves reflecting different realities of the Jewish world. They have their own dramaturgy. The music and text deepens and expands the intuitive access to the material, offering the audience the possibility of immersing themselves in the creative vision.
Working on the piece entails profound knowledge of both Jewish history in its beginnings and in the diaspora, and a deep understanding of Jewish traditions and the central texts that those traditions are founded on.

A DIALOGUE BETWEEN SALMAN SCHOCKEN AND JOSEF MENGELE

What is a mensch?

There are few higher Jewish compliments to pay someone than to call them a mensch, though, of course, a true mensch would be too modest to want to be complimented.
A mensch is a person who can be relied on to act with honour and integrity. But the Yiddish term means more than that: it also suggests someone who is kind and considerate.
Rabbi Neil Kurshan, author of the book Raising Your Child to be a Mensch, characterises it as “responsibility fused with compassion, a sense that one’s own personal needs and desires are limited by the needs and desires of other people. A mensch acts with self-restraint and humility, always sensitive to the feelings and thoughts of others”.
A mensch is driven by an innate decency, motivated perhaps by a sense of values to live up to but not out of regard for recognition. They will act as a mensch at times when it may be hard to be one. In Ethics of the Fathers, Rabbi Hillel said: “In a place where there are no men, strive to be a man. For man, read mensch.”

A piece created by Brian Michaels and Czeslaw Skwarek

Salman Schocken was an exceptional man. A visionary businessman whose stores in Saxony, Silesia and many other German cities, revolutionised the idea of a department store at the beginning of the 20th century. His stores made high quality goods available to working people for the first time, his employees enjoyed health support and other forms of social security. He was a cultural secular Zionist, seeing himself a s a part of the humanist traditions of Judaism. Having moved to Palestine after the Nazi takeover of power in Germany, he purchased the newspaper HAARETZ, which is still owned by the Schocken family today. The newspaper is a bastion of liberal progressive critical journalism. In the 1940s he moved to the USA, where he founded the Schocken Publishing House focussing on the publication of major Jewish authors in English for the first time, a prime example being Franz Kafka. He died in 1959 in Switzerland.

Josef Mengele who came from a wealthy manufacturing family in Günzburg Bavaria, studied to become a doctor in Munich,Vienna and Bonn in the 1930s. He joined the NSDAP in 1937 and the SS in 1938. He was a leading proponent of the Nazi ideology of “racial hygiene “, which provided him with the focus for his so-called scientific research. He became Camp Doctor in Auschwitz in 1943 carrying out numerous pseudo-scientific experiments on Camp prisoners. When the Red Army advanced on Auschwitz in January 1945, he fled to the Concentration Camp Groß-Rosen close to Waldenburg in Lower Silesia. He escaped capture, and with the help of his family, he fled to Paraguay and then Brazil, where he died in 1979. He was never brought to trial.

Memory of place, memory of man

“Mensch” by Brian Michaels and Katarzyna Gorczyca at the Szaniawski Theatre in Wałbrzych. Hubert Michalak writes in the portal Teatrologia.info:

“The starting idea for the performance is superb. Czesław Skwarek lightly enters the aesthetics of a performative lecture, with great charm and charisma focuses the audience’s attention on subsequent graphics arranging the space of the play, skillfully refers to the memory of the place and local history. The whole thing seems denser with every sentence he utters.

Schocken in this narration appears as a model Jew: a creative, charitable man, changing the world and implementing in his life the philosophical rule of tikkum olam also referred to in the performance.

Mensch is not a performance for the stage. It draws its strength from the fact that it is performed in this particular department store. Michaels and Gorczyca’s concept refreshed the trend, popular several years ago, of presenting plays in non-theatrical places. Enriched with accents of local memory and anchored in the architecture of the place, Mensch is also an incredibly sincere artistic statement.”

The opening day of Kaufhaus Schocken in Waldenburg/Walbrzych in 1929 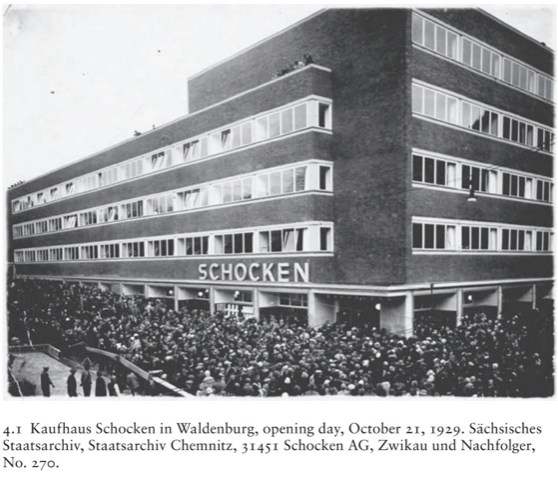 Inside the Schocken store in Walbzrych today 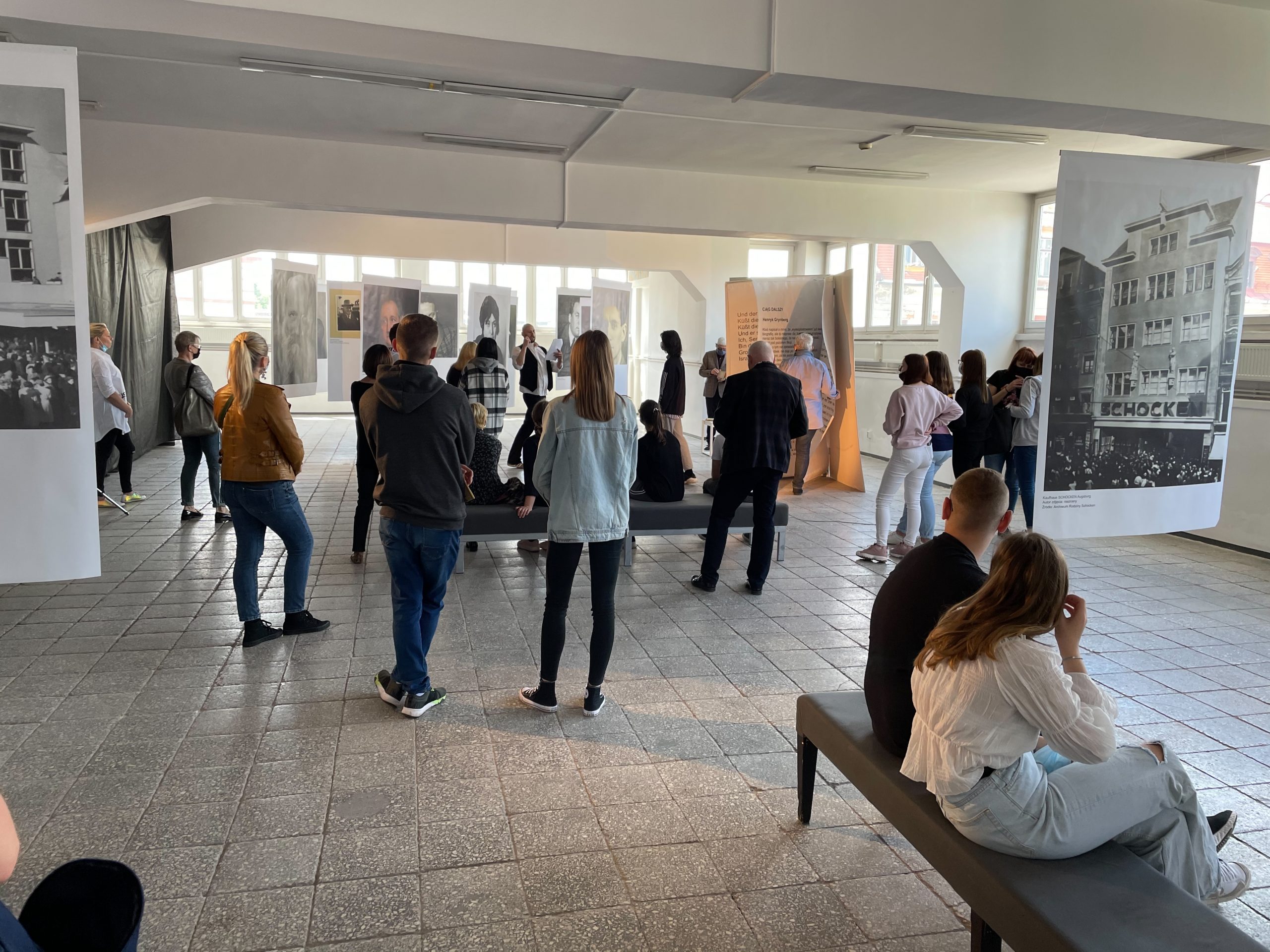 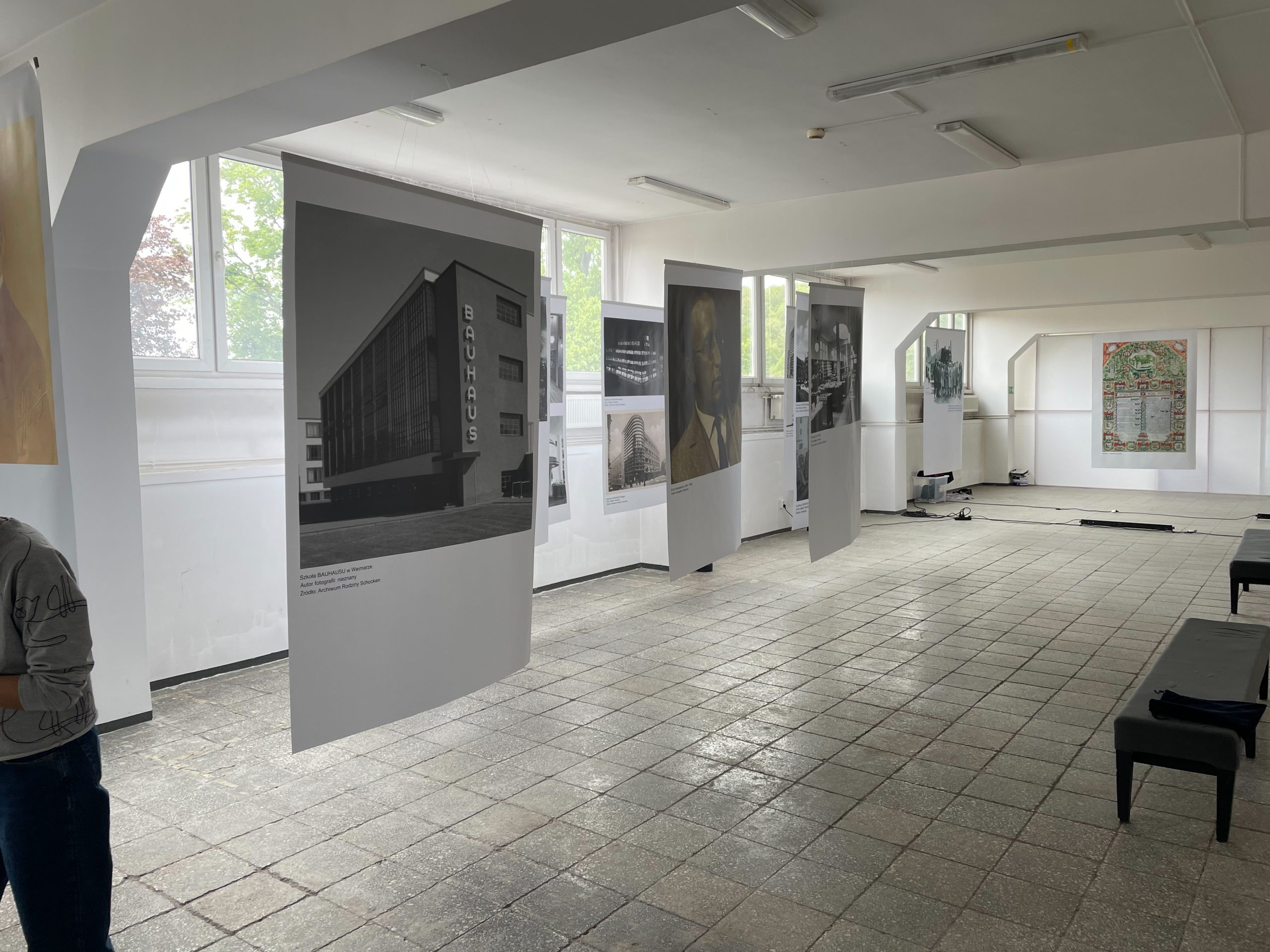 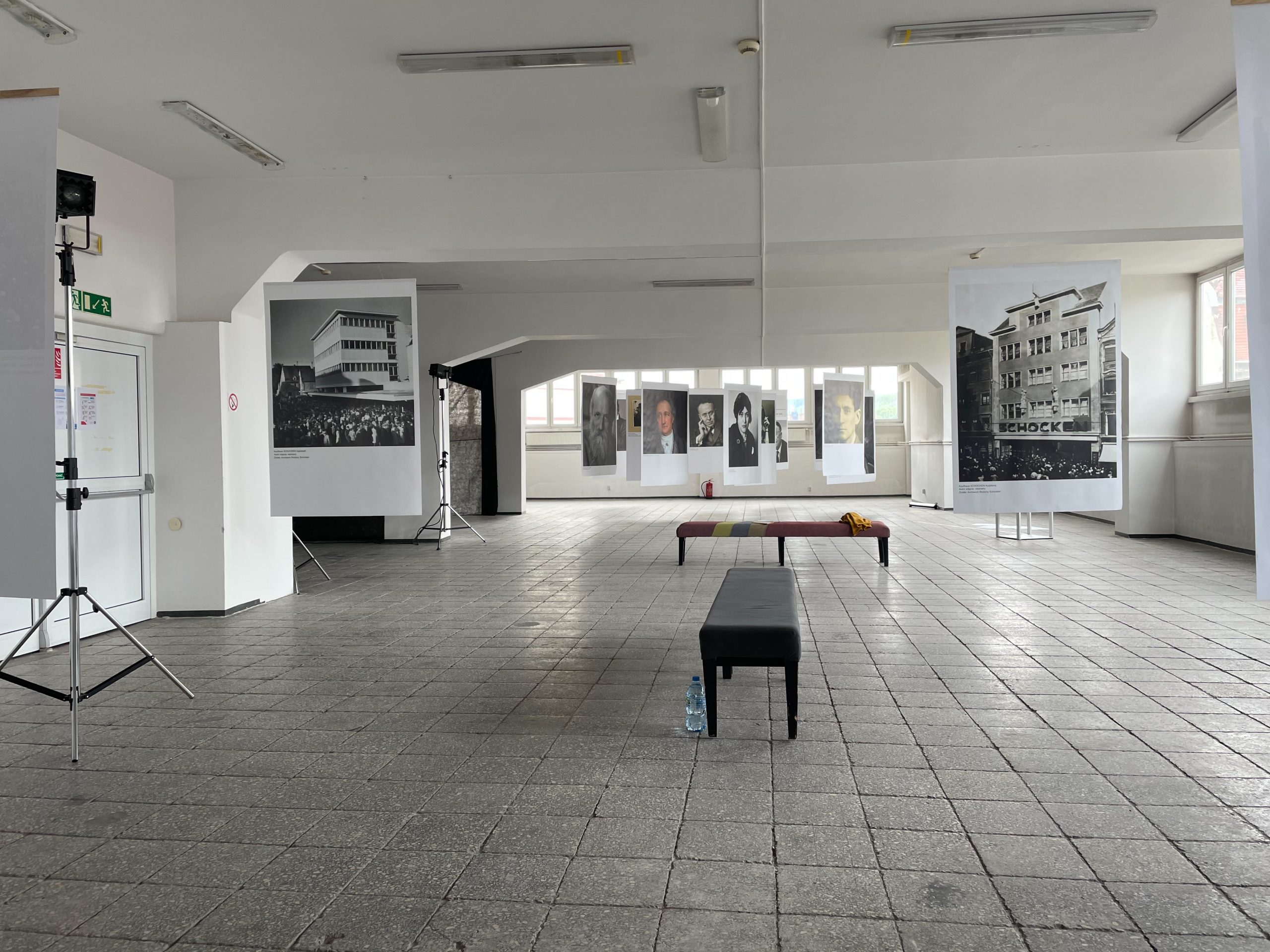 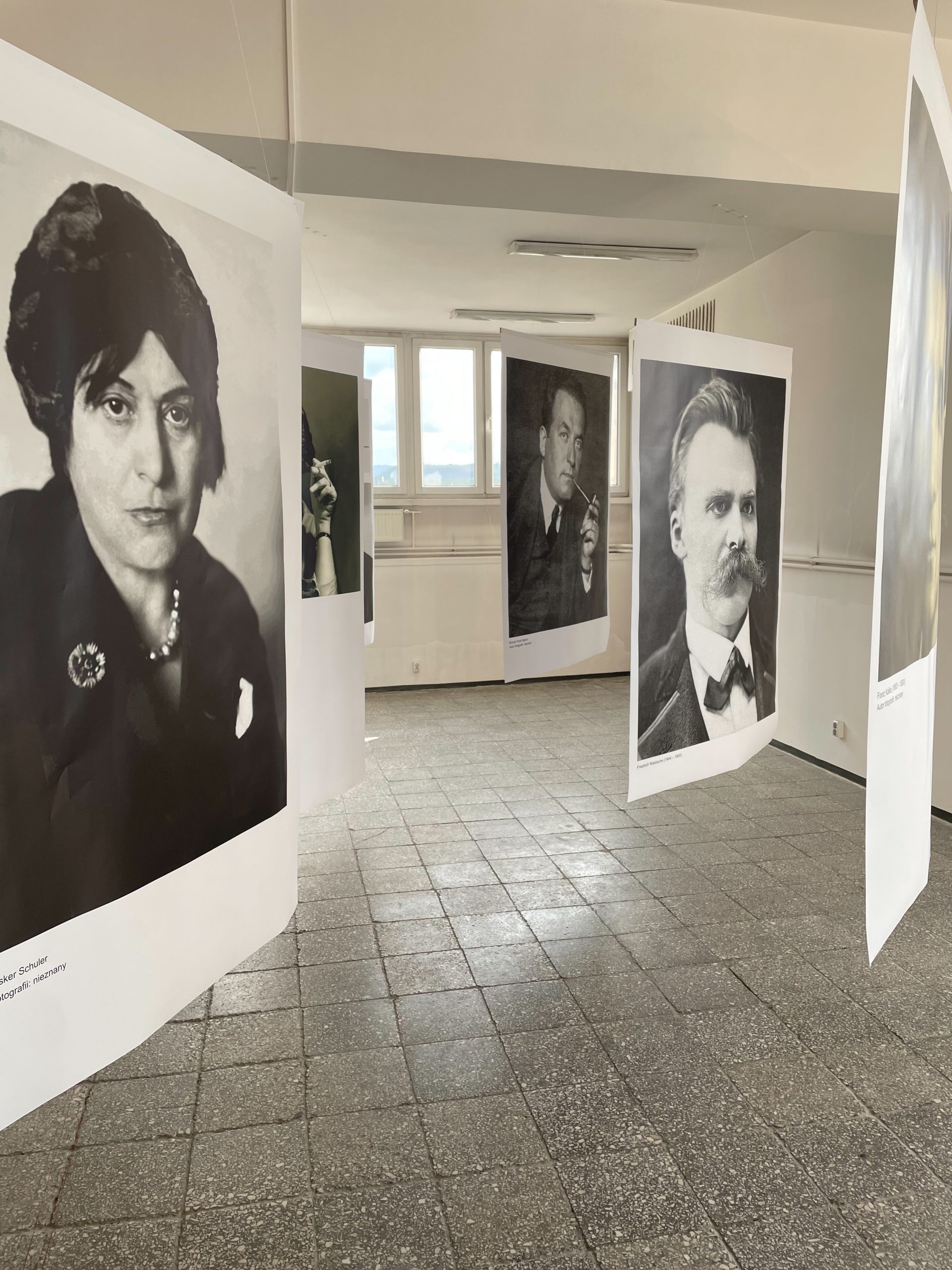 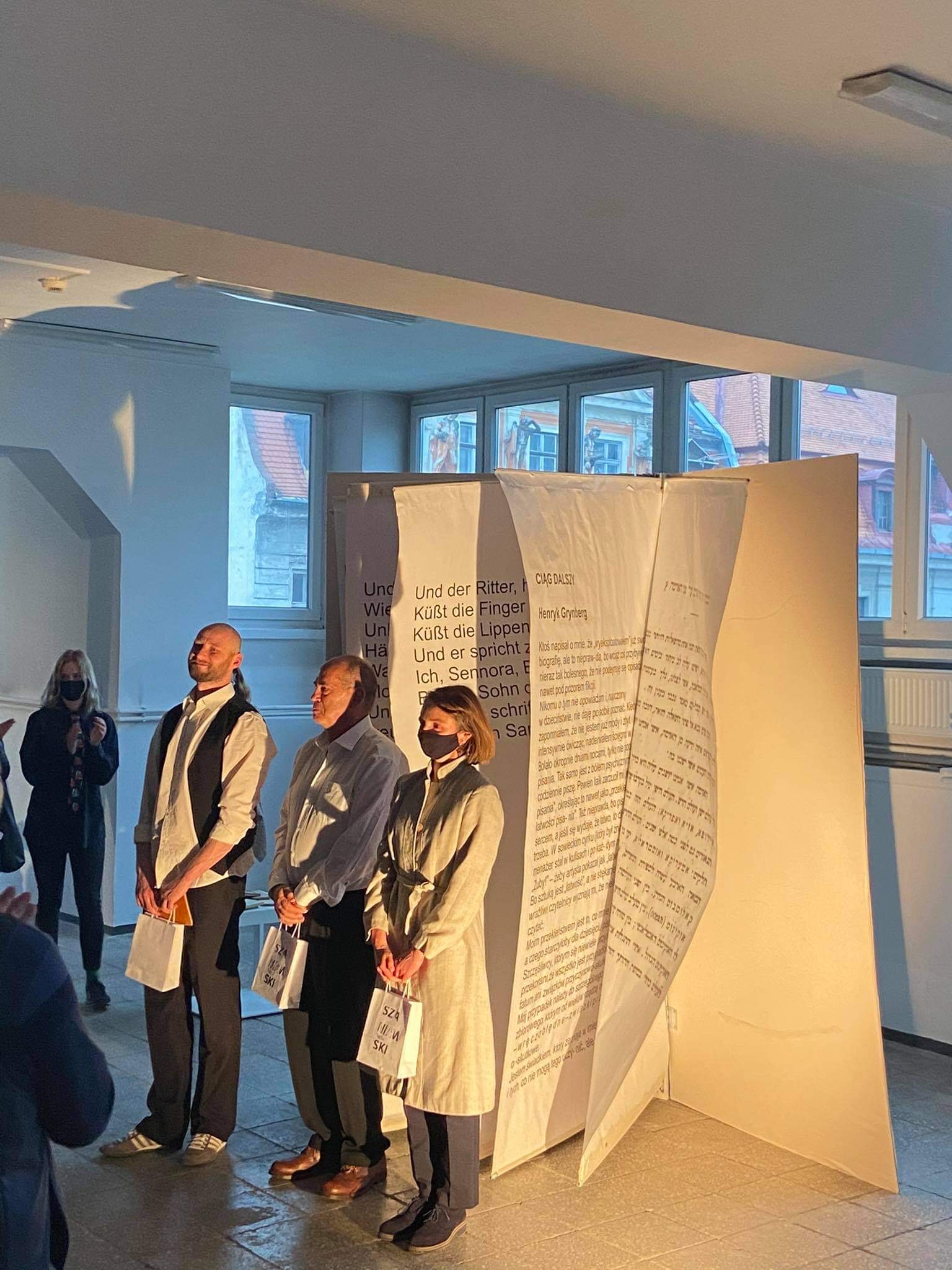